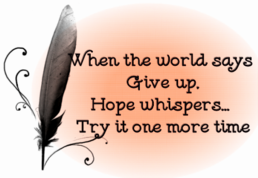 Hope quotes encouraged me when I was down.  We all go through times when we're in the dumps and nothing seems to be going right.  Be encouraged,  look ahead and see the bigger better picture.

Hope is faith holding out its hand in the dark.

Take hope from the heart of man and you make him a beast of prey.

We must accept finite disappointment, but never lose infinite hope.

Once you choose hope, anything's possible.

Hope is like a road in the country; there was never a road, but when many people walk on it, the road comes into existence.

Love recognizes no barriers. It jumps hurdles, leaps fences, penetrates walls to arrive at it destination full of hope.

When the world says, "Give up,"Hope whispers, "Try it one more time." 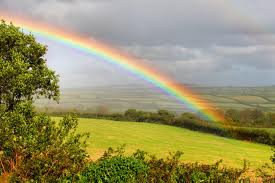 Hope is the poor man's bread.

Hope never abandons you, you abandon it.

All the great things are simple, and many can be expressed in a single word: freedom, justice, honor, duty, mercy, hope.

The miserable have no other medicine But only hope.

Hope is putting faith to work when doubting would be easier.

Hope is but the dream of those who wake.

Learn from yesterday, live for today, hope for tomorrow. The important thing is not to stop questioning.

It is the first purpose of hope to make hopelessness bearable.

I find hope in the darkest of days, and focus in the brightest. I do not judge the universe.

Hope is patience with the lamp lit.

It's all one thing - both tend into one scope -To live upon Tobacco and on Hope,The one's but smoke, the other is but wind.

The road that is built in hope is more pleasant to the traveler than the road built in despair, even though they both lead to the same destination.

My theory has always been, that if we are to dream, the flatteries of hope are as cheap, and pleasanter, than the gloom of despair.

The ninety and nine are with dreams, content but the hope of the world made new, is the hundredth man who is grimly bent on making those dreams come true.

Back From Hope Quotes to Encouragement Quotes