Click HERE To Read Part II of The Nutcracker

Here is a charming tale of a toy soldier that turns into a prince. I know that you will like this ageless story of The Nutcracker Part III.


Here is the third and final part of "The Nutcracker"

The next night fear and dread kept Marie awake. At the stroke of twelve she heard clanging and crashing in the parlor. And then suddenly, "Squeak!"

Soon Marie heard a soft knocking at the door and a faint little voice, "Miss Stahlbaum, open the door and have no fear. I bring good news!" Marie swiftly opened the door and found that the Nutcracker had turned into a prince!

The prince took Marie's hand and told her how he was really Godfather Drosselmeier's nephew, and an evil spell had turned him into a nutcracker. When he defeated the Mouse King, the spell was broken and he was turned back into a prince.

"Oh, Miss Stahlbaum," said the prince, "what splendid things I can show you in this hour of victory over my enemy, if you will follow me a little way."

Marie agreed and followed the prince to the big clothes cupboard in the entrance hall. The door of the cupboard was wide open. The prince stepped inside, pulled a tassel, and a little ladder came down through the sleeve of a traveling coat. 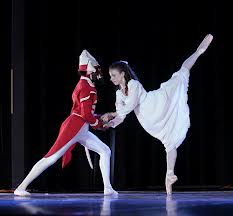 Marie climbed the ladder and soon passed through the sleeve. When she looked out through the neck hole, she found herself in a fragrant meadow.

"This is Candy Meadow," said the prince.

Looking up, Marie saw a beautiful arch as they were passing through it. "Oh, it's so wonderful here," she sighed.

The prince clapped his hands, and several little shepherds appeared. They brought up a golden chair and asked Marie to sit down. Then the shepherds danced a charming ballet. Suddenly, as if at a signal, they all vanished into the woods.

The prince took Marie's hand and led her down Honey River. Downstream there was a sweet little village. "This is Gingerbread City," said the prince. "The people who live here are beautiful, but most are dreadfully cranky because they have awful toothaches. But instead of worrying our heads over that, let's sail across the lake to the capital."

The prince clapped his hands. The gondola appeared in the distance and quickly came closer. Marie and the prince stepped onto the gondola, which quickly started off again.

Soon Marie found herself near a marvelous city. "This," said Nutcracker, "is the capital." The city was so beautiful and splendorous. Not only were the walls and towers of the most magnificent colors, but the shapes of the buildings were like nothing else on earth.

Suddenly, Marie saw a castle with a hundred lofty towers. "This," said the prince, "is Marzipan Castle." At that moment soft music was heard, the gates of the castle opened, and out stepped four ladies so richly and splendidly attired that Marie knew they could only be princesses. One by one, they embraced their brother.

The ladies led Marie and the prince to an inner room, whose walls were made of sparkling colored crystal. The princesses planned to prepare a meal for Marie and the prince. They brought in the most wonderful fruit and candy Marie had ever seen and began to squeeze the fruit and grate the sugared almonds.

The most beautiful of the prince's sisters handed her a little golden mortar and said, "Dear sweet friend, would you care to pound some rock candy?"

While Marie pounded away, the prince told the history of the cruel war between the Mouse King's army and his own.

As Marie listened to his story, she began to feel very dizzy. Soon Marie felt as though she were falling.

Marie fell to the floor. When she opened her eyes, she was lying in her little bed, and her mother was standing there.

"How can anyone sleep so long!" her mother exclaimed.

"Oh, Mother," said Marie, "you cannot imagine all of the places that young Mr. Drosselmeier took me to last night."

Marie's mother looked at her in amazement. "You've had a long, beautiful dream, but now you must forget all that nonsense," she said.

"But, Mother dear," said Marie, "I know that the Nutcracker is really young Mr. Drosselmeier from Nuremberg, Godfather Drosselmeier's nephew."

Mrs. Stahlbaum burst out laughing. Marie was on the verge of tears. Her mother sternly said, "You're to forget about this foolishness once and for all." So she did. 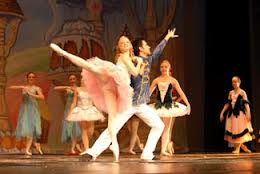 One day Marie's mother came into her room and said, "Your godfather's nephew from Nuremberg is here. So be on your good behavior."

Marie turned as red as a beet when she saw the young man, and she turned even redder when young Drosselmeier asked her to go with him to the cabinet in the parlor.

He went down on one knee and said, "Miss Stahlbaum, you see at your feet the happiest of men, whose life you saved on this very spot. Please come and reign with me over Marzipan Castle."

Marie said softly, "Of course I will come with you."

Marie left in a golden carriage. And she is still the queen of a country where the most wonderful things can be seen if you have the right sort of eyes for it.

Back From The Nutcracker Part III to Holiday Quotes

Back From The Nutcracker Part III to Encouragement Quotes