This is another classic story. I'm thankful that this is a season giving. Enjoy The Little Drummer Boy.

David grew up in the kitchen of the inn. His father was the innkeeper. His mother cooked the food. David's older sisters cleaned the rooms, and his older brother swept the stable. David loved to sing. He would sing to his mother as she cooked the food. David made up songs and banged on pots and bowls as he sang to her. David's mother smiled at him. "Someday you will sing in the temple, my son," his mother said. David grinned at his mother. "Tem-ple," David said very carefully.

David's father came into the kitchen. "How is my big boy?" David's father asked as he swung David onto his shoulders. "Pum Pum Pum! Tem-ple come!" David sang as he drummed on his father's head with a wooden spoon. David's father smiled as his son kept on drumming. "We must find this boy a drum or my poor head will not survive!" said David's father, with a laugh.

One day David's father said to his family, "We are going to be very busy. Caesar Augustus has ordered a count of all the families in all the towns." "Pum Pum. Pa-rum-pum-pum-pum. I counted six of us!" David sang. "Why does this make us busy?" "Because people will come to Bethlehem to be counted with their families," said David's father. "They will need a place to stay. They will stay with us, and we will be very busy." 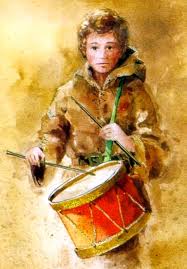 David's mother cooked more food. David's sisters cleaned the rooms. David's brother swept out the stable and put new hay and pots of water in the stalls. David's father greeted the people as they came into town. Soon the inn was very full. David played his drum and sang his songs for the people.

Late one night there was a knock at the door. David peeked around his father at the young man and his wife, who was on a donkey. They had no room for these people! What could they do? David's father was a kind man. "You can stay in the stable," he said. "It is warm and dry there. I can send food out to you." The young man thanked David's father and walked the donkey to the stable.

David helped his mother carry bread and cheese out to the young couple. His mother told him the woman was going to have a baby soon. The next day there was a lot of excitement. "The young woman who stayed in the stable last night had her baby," David's mother told him. "The baby is the King of Kings, they say!" said David's father. 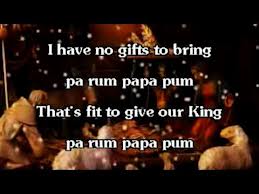 David could not see the baby because of the crowd around the stable. David stood at the back of the crowd and began to make up a song for the baby: "Come, they told me, our newborn king to see. Our finest gifts we bring to lay before the king. So to honor him when we come."

The crowd began to part when they heard David's beautiful singing: "Baby Jesus, I am a poor boy, too. I have no gift to bring that's fit to give a king. Shall I play for you on my drum?"

David stepped closer to Mary, Joseph, and their son. Baby Jesus smiled at David, reached out, and patted his drum.