The Gift Of The Magi
Part III

As you read part III of the Gift of The Magi remember this holiday season that gifts that money can buy are great, but the greatest treasures are gifts given and received that come from the heart.

Christmas Stories: 'The Gift of the Magi' Part III

Della finally moved and went for him. "Jim, darling," she cried, "please don't look at me that way. I had my hair cut off and sold because I could not have lived through Christmas without giving you a real present. And I certainly didn't have enough money saved."

Della held Jim's hands and looked into his eyes. "It will grow out again," she said. "You won't mind, will you? I just had to do it. My hair grows awfully fast. Please say 'Merry Christmas!' Jim, and let's be happy. You don't know what a beautiful, nice gift I have for you."

"You've cut off your hair?" asked Jim, as if he had not arrived at that patent fact yet even after the hardest mental labor.

Della held his hand tighter still, warming it with her own. "Cut it off and sold it," said Della. "Don't you like me just as well, anyhow? I'm me without my hair. Don't you think so?"

Jim looked about the room curiously. "You say your hair is gone?" he said, with an air almost of idiocy.

"You needn't look for it," said Della. "It's sold, I tell you, sold and gone, too. It's Christmas Eve, boy. Be good to me, for it went for you. Maybe the hairs of my head were numbered," she went on with sudden serious sweetness, "but nobody could ever count my love for you."

Della waited for Jim to speak then. He took off his coat without speaking and then turned back to Della.

Out of his trance Jim seemed quickly to wake. He grabbed Della in his arms.

For ten seconds let us regard with discreet scrutiny some inconsequential object in the other direction. Eight dollars a week or a million a year, what is the difference?

A mathematician would give you the wrong answer. The Magi brought valuable gifts, but that was not among them. This dark assertion will be illuminated later on.

Jim drew a package from his overcoat pocket and threw it upon the table. "Do not make a mistake Dell, about me," he said. "I don't think there is anything in the way of a haircut or a shave or a shampoo that could make me like my girl any less. But if you will unwrap that small package you may see why you had me going a while at first."

White, nimble fingers tore at the string and paper. Della let out an ecstatic scream of joy. Then her voice turned to hysterical tears and wails as she examined the contents of the box.

For there lay "the combs," the set of combs, side and back, that Della had worshiped long in a Broadway window. Beautiful combs, pure tortoise shell, with jeweled rims, just the shade to wear in the beautiful vanished hair. They were very expensive combs, she knew, and her heart had simply craved and yearned over them without the least hope of possession. And now, they were hers, but the tresses that should have adorned the coveted adornments were gone.

Jim summoned up all of his comforting powers and said, "I can take the combs back and get the money."

But she hugged them to her bosom, and at length she was able to look up with dim eyes and a smile and say, "My hair grows so fast, Jim!"

And then Della leaped up like a little singed cat and cried, "Oh, oh!" She ran to the table and opened the box for Jim.

Jim had not yet seen his beautiful present. She held it out to him eagerly upon her open palm. The dull precious metal seemed to flash with a reflection of her bright and ardent spirit.

"Isn't it a dandy, Jim?" Della asked. "I hunted all over town to find it. You'll have to look at the time a hundred times a day now. Give me your watch. I want to see how it looks on it."

Instead of obeying, Jim tumbled down on the couch and put his hands under the back of his head and smiled.

"Dell," said Jim, "let's put our Christmas presents away and keep them a while. They're too nice to use just yet. I sold the watch to get the money to buy your combs. And now suppose we get dinner ready." 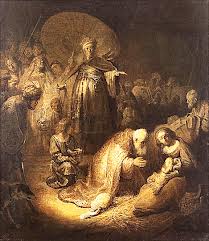 The Magi, as you know, were wise men who brought gifts to the Babe in the manger. They invented the art of giving Christmas presents. And here I have lamely related to you the uneventful chronicle of two foolish children in a flat who most unwisely sacrificed for each other the greatest treasures of their house. But in a last word to the wise of these days let it be said that of all who give gifts these two were the wisest. Of all who give and receive gifts, they are wisest. They are the Magi.

I hope that you enjoyed this story The Gift of The Magi.

Back From The Gift of The Magi to Encouragement Quotes

Back From The Gift of The Magi to Holiday Quotes