Celebrate this holiday season with your loved ones by reading one of many Inspirational Christmas Stories. Charles Dickens "Scrooge " "A Christmas Carol" is a great story to start with.

My daughter was in Poland visiting with her in-laws last year during the holiday season. even though she was in another country we still managed to stay in contact with one another. I talked to her long distance. Actually we talked through skype . A group of young carolers came to the door.

In Poland it is still traditional, just as it is Illustrated in the Inspirational Christmas story "A Cristmas Carol," for carolers to go door to door and sing.

The carolers are welcomed into each home. After singing they receive a special treat that had been set aside for any visitors coming in throuhgout the season. The carolers then proceeded to the next home. 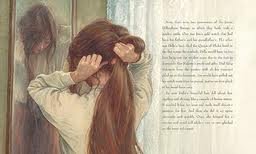 Here is the third part of ("A Christmas Carol")

"Crachit!" Scrooge frowned at the threadbare furnishings. "This is where he lives?"

The ghost nodded. "It's all he can afford. His employer is a bit of a miser. And here's Mrs. Crachit."

A woman carried a small turkey into the dining room on a platter. She had adorned her dress with bright red ribbons, but her dress was mended and worn. She smiled as she carried the platter to the table.

The older children giggled and scrambled to the table.

"Their clothes are rags," said Scrooge, "and their turkey is nothing but bones." He shook his head. "But they're laughing."

Bob Crachit lifted the youngest boy from a chair in the corner and carried him to the table. The boy was pale and thin and carried a crutch.

Scrooge pointed at the boy. "What's wrong with him? Why doesn't he walk?"

"He's very sick," said the ghost. "His name is Tiny Tim, and his parents don't have money for a doctor. If the future remains unchanged, Tiny Tim will die."

"Die?" Scrooge stared at the boy.

Tiny Tim raised his cup of water and smiled at his mother and father. "Merry Christmas!" he said. "God bless us every one."

"Come," said the ghost, and he turned to leave.

"But the boy," said Scrooge. "Tiny Tim. There must be something we can do."

"Perhaps," said the ghost, as he led Scrooge from the house. Outside, the street was gone, and Scrooge found himself watching another family--a mother, father, grandparents, and children, celebrating Christmas in a hut.

Scrooge frowned and said, "They're sitting on a dirt floor, eating from crude bowls, yet they're laughing."

The hut vanished and was replaced by a tiny lighthouse room. The lighthouse keeper and his assistant were sharing Christmas dinner at a rickety wooden table. Outside, waves crashed against the rocks.

As the two men lifted their mugs in a toast, the lighthouse faded. Scrooge found himself entering another dining room, one Scrooge knew very well.

"My nephew's house!" said Scrooge. "He's having a party."

Scrooge's nephew stood up and said, "Guess who I am?" He pulled coins from his pocket, counted them, counted them again, then clutched them tight in his fist and muttered, "Christmas. Humbug."

"Easy," shouted a man. "Ebenezer Scrooge!" The other guests laughed.

"They're making fun of me," said Scrooge.

The ghost nodded. "And they always will. Unless the future changes."

"Change? But how?" cried Scrooge. 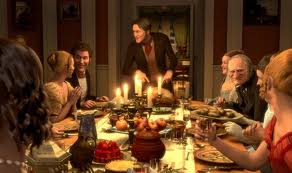 BONG! BONG! BONG! Scrooge blinked. He was in his own bed again, and the Ghost of Christmas Present was gone. But as he sat up, another ghost floated into the room. He was draped in black, and a dark hood hid his face.

Scrooge pulled the sheets to his chin. "Who are you?" he asked.

The phantom said nothing.

The phantom gestured toward the door. Scrooge followed him to the street in front of his countinghouse. The door was locked, and the windows were dark. Three men stood out front, talking and shaking their heads.

"I know those fellows," said Scrooge. "I do business with them. We're quite friendly. These men like me, even if my own nephew does not."

The ghost led Scrooge closer. Scrooge could hear what the men were saying.

"He must be near dead if he's closed up his firm for the day," said another.

"If I know Ebenezer," said the third man, "he'll work during his own funeral."

The men laughed. "It is bad news, though," said the first man. "If Scrooge closes down, I'll have to find another countinghouse."

"Another countinghouse!" sputtered Scrooge. "But I'm not closing down." He turned to the ghost. "Why did you bring me here?"

The phantom turned and drifted down the street. Scrooge followed him and soon found himself in a tiny room with faded walls and worn furnishings.

"But this is Crachit's house," Scrooge said, as he peered around the room. "I've already been here. I've already seen them."

The spirit shook his head and led Scrooge into a bedroom that was hardly bigger than a closet. Mr. Crachit sat next to a small bed and held Tiny Tim's hand. Tears trickled down Mr. Crachit's cheeks.

"What's wrong with them?" said Scrooge. "They were so happy last time I was here, laughing and playing. And where's Mrs. Crachit?"

The bedroom door opened, and Mrs. Crachit came in. Scrooge watched Tiny Tim sleeping in the bed. He was thinner than he had been at Christmas dinner, and his face was drawn and pale. His crutch rested against the bed, and a ball of mistletoe hung above his head.

"Did you see Scrooge?" asked Mrs. Crachit. "Will the old miser help us?"

Bob Crachit shook his head. "Mr. Scrooge says he won't help those who can't help themselves." He took Mrs. Cratchit's hand in his. "But Mr. Scrooge's nephew offered to help us."

"Without Tiny Tim?" Scrooge turned toward the ghost. "But that can't be. He's not dying, is he?"

Find out how "A Christmas Carol" ends.

Back From A Christmas Carol Part III To Holiday Quotes

Back From A Christmas Carol Part III To Encouragement Quotes